In 2015, Non-profit Executive Director needed to meet two metrics in order to garner larger donations from corporate donors. Corporate donors often base their giving on metrics like reach and impact. The KPI's were: The PeaceJam Foundation needed at least 1 million total social media followers and 1 million website page-views per year. From December 2013 to March 2015, using organic methods we managed to increase the total social media following on Facebook, Twitter, YouTube, from 6,000 to approximately 300,000 followers. (Approximately 18,750 organic followers per month). Pictures and memes of the Nobel Peace Prize Winners serving on the PeaceJam Board performed well.

To resolve the social media following dilemma, I submitted a proposal to the executive director based on a smaller experimental Facebook ad which I had run in order to gauge what a “follow” would cost through Facebook’s internal advertising system. It's helpful to think of a Facebook "like" as the equivalent of a E-mail subscription. After approval, I spent roughly $14,000 on Facebook and the Facebook promotions of the Hero Awards over a period of three years. With the right targeting, this resulted in 800,000 followers, the bulk of PeaceJam’s total social media network. 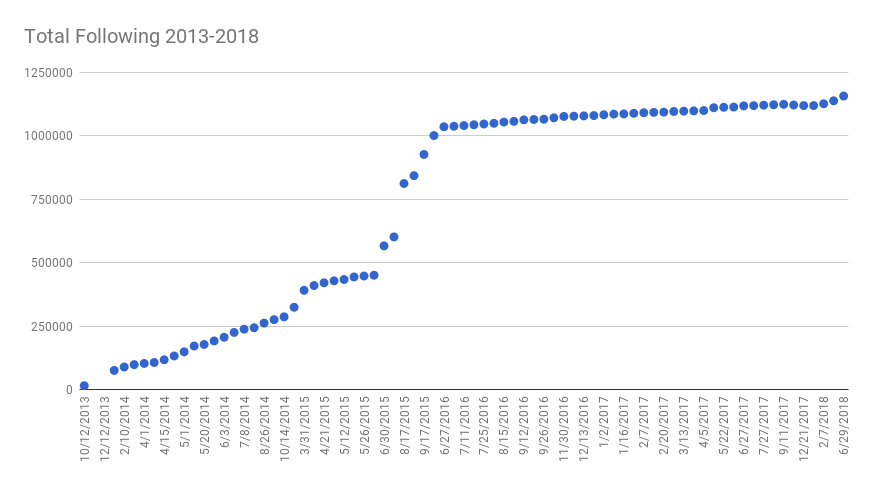 The Social Media Contest "Hero Awards" as a User Generator

The total website traffic was averaging 30,000 pageviews a month. In light of this expanded goal, I applied for and optimized a $10,000 a month Google Adwords Grant, which resulted in 30,000 pageviews per month.

I came up with a variety of web traffic contests which were designed to gauge the attention of our newly gained social media followers and potential leads. A “Free DVD” contest, a “Free Trip to New York” both of which were promoted with a PPC campaign. And finally the “Hero Awards.”

The first two contests were designed using SEM best Practices and had quality scores which respectively reduced the cost per click. Fundamentally, if an advertisement has a higher quality score, Google is willing to reduce the amount you spend to get that click, meaning that by focusing on quality score, ANY organization can dramatically reduce their spend - even with hyper-competitive keywords because what you pay for a click in Google Adwords is based on a very simple formula (Bid x Quality Score = Cost Per Click). By Focusing on this metric we were able to stretch our limited resources.

Every year the PeaceJam Foundation makes a film about the lives of a Nobel Peace Prize winner who is serving on the board. The film premieres at the Monte Carlo Television and Film Festival. We determined that an Award presented by a Nobel Peace Laureate would be something that people might enjoy receiving. It would also minimize costs and maximize prestige as the event was already paid for and Film premieres are pretty fancy.

You can see the archived landing page here:

After submitting a few proposals to the Executive Director, we determined our best plan of action. Modeled after a video vote contest by QDoba, where they asked users to submit videos and vote on them. We decided to make a half juried, half public vote contest, where users could have their own followers vote for their favorite Nominees.

Additionally, I communicated the strategy and the structure of the contest to PeaceJam’s internal web team. Such as; How the landing page should look? ( I wish I kept the mock-ups). What order the videos should go in? Why did we decide not to display vote counts above 1000? Which each had their own strategic answer.

I strategized the BillionActs Hero Award with the intent to generate new user leads, generate web traffic, and increase brand awareness. The central idea included an award presented by a Nobel Peace Laureate during PeaceJam’s yearly film premiere at the Monte Carlo Television and Film Festival. Nominees in 5 categories win an award based on a half jury, half public vote. In 2017 alone, this multi-department social media contest received 10,036 new registered users, 30,903 votes, and 94,222 organic page views.

Public nominations were accepted until March of 2017, users were encouraged to nominate their favorite Act of Peace through the BillionActs website. At the end of the year, we selected 10 of the best Acts of Peace logged on the BillionActs website, and these top ten acts of peace became the semi-finalists for the Hero Award. The semi-finalists competed in 5 different on-brand categories; Best Youth Act, Best Non-Profit Act, Best Business Act, Best University Act, and Best Up and Coming Peacemaker. Team mebers worked together to create a video for each semi-finalist that briefly explained what each semi-finalist accomplished that qualified them for the nomination. For quality control reasons, we made all the videos in-house. This ensured that we portrayed our brand to the public in a consistent manner and that no person would have an advantage or disadvantage based on the quality of their video production. I wrote draft copy for each of the video script, which followed a simple formula: demonstrate the problem with legitimate statistics, then position the semi-finalist as the solution.

Semi-finalists were allowed 4 weeks between April and May to encourage their followers to help measure their impact by voting. This short voting period added urgeny to the campaign. During this time period, I drafted language for the nominees to share on their social media outlets and coordinated with each of the semi-finalists’ marketing teams to highlight each nominee on a particular day across our internal 1.1 M follower social media network. This allowed us to maximize our organic exposure for each nominee. Voting required users to register through the BillionActs of Peace website. This resulted in new user registrations. In order to prevent the contest from becoming a popularity contest, the winners were partially determined by popular vote and partially determined by a jury made up of Nobel Peace Laureates serving on PeaceJam’s board. Winners were announced just after the PeaceJam Foundation’s board meeting that June.

Here are some sommuncations from the 2017 Hero Awards Social Campaign.

A snapshot of the one month improvement between all three campaigns. The result is approximately 10x more traffic than the month before.

​These are excellent numbers. Even the bounce ratio and exit percent are good, getting below 50% is supposed to be really really hard. The lowest I've ever heard of is 5%, a top performing website will be at around 40%.

Traffic sources by Rank, in Pageviews

There are 62 other sources mostly email clients.

We have approximately 16,107 votes, and are awaiting the new user count.

Traffic sources by Rank, in Pageviews